That's a crucial question, especially with California's history and future of disastrous wildfires. Last year was the state's worst fire season ever: 9,639 fires burned 4.3 million acres or more than 4 percent of the state's roughly 100 million acres of land, according to the California Department of Forestry and Fire Protection.

Enter bee biologist Lauren Ponisio, a native of California's Central Valley who is now an assistant professor at the University of Oregon, Eugene.  She will address a webinar hosted from 10 a.m. to 11:30 a.m., Friday, May 28 by the California Association of Resource Conservation Districts (CARCD).

Also billed are Anne-Marie Bentz of the California California Native Plant Society, who will present information on how to create fire-wise, pollinator-friendly gardens, and Don Hankins, professor of geography and planning at California State University, Chico, who will discuss traditional burning and pollinators. Hankins, UC Davis-educated, holds a bachelor's degree in wildlife, fish and conservation biology and a doctorate in geography from UC Davis.

"Fire has a major impact on the structure and function of many ecosystems globally," according to Ponisio and her colleagues in their 2016 published research, "Pyrodiversity Begets Plant-Pollinator Community Diversity in Global Change Biology.

"Pyrodiversity, the diversity of fires within a region (where diversity is based on fire characteristics such as extent, severity, and frequency), has been hypothesized to promote biodiversity, but changing climate and land management practices have eroded pyrodiversity," they wrote in their abstract.  "To assess whether changes in pyrodiversity will have impacts on ecological communities, we must first understand the mechanisms that might enable pyrodiversity to sustain biodiversity, and how such changes might interact with other disturbances such as drought."

Ponisio holds two degrees from Stanford University: her bachelor's degree in biology with honors in ecology and evolution, 2010, and her master's in biology in 2011. She received her doctorate in 2016 from the Department of Environmental Science Policy and Management at UC Berkeley.  Ponisio served as a Moore/Sloan Data Science Postdoctoral Fellow at the Berkeley Institute of Science from 2016 to 2017, before joining the UC Riverside Department of Entomology as an assistant professor in 2017. She accepted her current position with the University of Oregon's Department of Biology in 2020.

Ponisio was featured July 20, 2020 in People Behind the Science Podcast, Working to Preserrve and Restore Populations of Bees and Other Pollinators: "The United States is home to thousands of different species of native bees that are important for agriculture and natural ecosystems. Lauren's research revolves around preserving and restoring bee populations in agricultural areas and other natural habitats. She is interested in understanding the distribution and health of different populations of native bees." 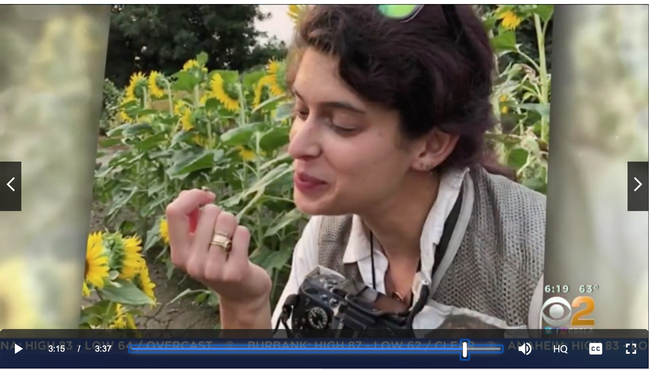 This is a screen shot of Lauren Ponisio in a CBS Los Angeles video, "Bee Biologist Can't Stop Buzzing About Her Work." CBS wrote that she "puts science, technology and math to work in her study of bees."